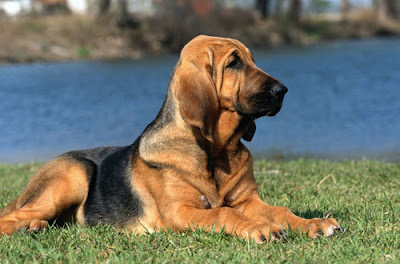 Terrierman is on another rant about inbreeding. In Howard Galton's Bloodhounds posted on March 25, Terrierman blogged that "The deleterious effects of inbreeding have been known for as long as man has been alive, which is why there is a ban on it in all religions (one of the very few commonalities across the religious spectrum)."

Interestingly enough there was a different take on this "taboo" subject quite recently on Canadian Show Dogs. Much appreciation to Grace Harper, Silver Park Australian Stumpy Tail Cattle Dogs for allowing me to include her thoughts here: 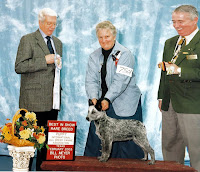 "Years ago when my father was still alive we raised cattle. One day I ran across a book written by a Hereford breeder that really put the whole 'line breeding' subject into context. In this book he stated 1). That he was a God fearing man and had no intention of offending anyone, and 2) Linebreeding was a practice "established by God". Then he went on to explain his reasonings behind it and laid down pedigrees proving it. Linebreeding is a tool as such used to perpetuate a particular trait (or traits) within a species. Where as the stockman may linebreed for weight gain ability, wool/hair production, docility or hornless traits (to name but a few) ... he had other ideas about what God was striving towards that I wont get into. But the examples he used were pedigrees with Abraham and his wife Sarah having a common grandsire. Their son Isacc then took a wife from his mothers line.etc etc ......... all the way down to David and then later to Mary and Joseph. Whether one agrees with the author or not ... it was enlightening in the explanation of how linebreeding was a great tool. On the same note ... I recently had a young friend of mine become all upset that some would think her breeding a half bro/sister to be a horrible thing and she would be black balled so to speak by others in the breed club. I told her to "stop worrying over what others are thinking. To my knowledge there was no such thing as a "GREAT dog or horse" that ever came from a continual outcross to outcross to outcross. Don't misunderstand, I agree that outcrosses serve a valuable purpose ........ but any dog or horse that was spectacular in his own right was the product of linebreeding."

Linebreeding is a tool that works if you pay attention ...

Grace Harper is the breeder of 80 + AKC champions, a world winner, and 3 times a piece of Westminster.

An additional perspective comes from Dr. Malcolm B. Willis' recent article in Our Dogs - Inbreeding: time to rethink in which he states:

"What can occur is inbreeding depression which leads to a reduction in fertility, a decrease in litter size, and an increase in mortality. However, inbreeding depression is not inevitable and over a period of time, numerically large breeds can show no adverse effects. In a study undertaken in 1908 on 29 litters of Bloodhounds, Heape showed a mean litter size of 10.06. I have recently undertaken a similar study on a similar number of litters in Bloodhounds and found the litter size to be a half a puppy less, which indicates that in a century of breeding, virtually there are no adverse effects on litter size."

Where exactly is all the evidence of inbreeding depression in purebred dogs that the doom 'n gloomists are always going on about? Clearly, litter size is not suffering.

Don't get me wrong, I am not suggesting that inbreeding should be used exclusively or frequently, I am just trying to put a little perspective on it.

Inbreeding (very close breedings of parent to offspring or littermate to littermate) is actually extremely rare in the breeding of dogs and comprises less than 1% of all dogs registered with kennel clubs.

So all this fuss on Pedigree Dogs Exposed, Terrierman's Blog, and Nightline over a tiny fraction of the purebred dog population!

I love my dogs but at the same time I realize that dogs are not the equals of human beings.

Selective breeding of dogs is in no way similar to the ethical considerations involved with the practise of eugenics with human beings in the past.

Nor are inbred puppies comparable to children resulting from an incestuous pairing.

There are moral and ethical issues with regard to human incestous pairings that do not apply to dogs.

The difference is the use of selection which is acceptable in the breeding of animals, but morally reprehensible to human beings, harkening back to the dark days of eugenics.

Selecting for health, temperament, structure, and appearance in dogs is intended to improve and preserve health and breed characteristics. It's not elitist or purist as some like to suggest.

Used appropriately, careful selection for positive and useful attributes can be beneficial in the breeding of dogs (although those who consider dogs to be "children in fur", with the same rights as human beings, will probably never agree).
Posted by Blog for Show Dogs at 3:59 PM

As with all extremist statements, they obviously pull "facts" like rabbits out of their hats without knowing what they're talking about or make actual facts fit their arguments by taking them out of context. Terrierman is no exception and if it wasn't so "spectacular" his words would be taken for their true worthlessness. I disagree with him/her on many counts...ie: that there are few commonalities between the religions. I actually see few Differences between religions.