What do dogs have in common with fruit flies? 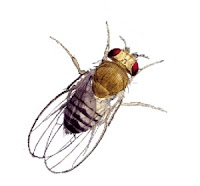 Just this week I was sent the link to this article and I thought it was one that was worth sharing. Note the last paragraph. The Genetic Dynamics Of Inbreeding Depression "It means that there is no easy fix to the problem of inbred populations. The best approach is to try to preserve and maintain genetic diversity in natural populations well before they begin their slide into an "extinction vortex," he said."

Some things to keep in mind about this paper:

(1) First it's a study of fruit flies, not even mammals, let alone dogs.

(2) The fruit flies were genetically identical except for one chromosome. Even siblings in a high COI purebred dog litter would not come close to being as genetically similar similar as the fruit flies in this particular study.

(3) No dog breeder ever inbreeds to the extent that occurred in this research.

Some will try to argue that dog genetics is no different from genetically manipulated fruit fly studies.

But what useful information for dog breeders comes out of exaggerated "near clone" type experiments using fruit flies?

This study is being inappropriately used to promote the "evils" of inbreeding in dogs, without any mention of how breeders are able to use selection and pedigree histories to increase the liklihood (probability) of producing healthy, sound, examples of the breed.

It never ceases to amaze me why we need to extrapolate from the results of studies of fruit flies and other animals in order to predict the possible effects of inbreeding in dogs. I mean we have millions of purebred dogs just laying at our feet. Why can't we study them?

Normally research results are only extrapolated to other situations that cannot be directly investigated.

For whatever reason, we have few studies of dogs to draw from, which begs the question could that be because there really is no need for such studies?

I mean, where is the evidence?

If purebred dogs really are in the crisis that some claim, would there not be much insistence from recognized authorities to collect data and investigate the issues, and wouldn't the evidence be glaring?

Millions of public funds go into research projects for wild animals, and yet it is only the dog breed clubs that fundraise for research into genetic diseases affecting purebred dogs.

That's pretty compelling evidence that the only people who really care about the health of purebred dogs are the breed fanciers themselves. But, hey, aren't they the very ones that the television expose Pedigree Dogs Exposed was talking about? You know the people who are to blame for ruining all these breeds in the first place?

Pedigree Dogs Exposed has about as much in common with the truth as dogs have with genetically altered fruit flies.